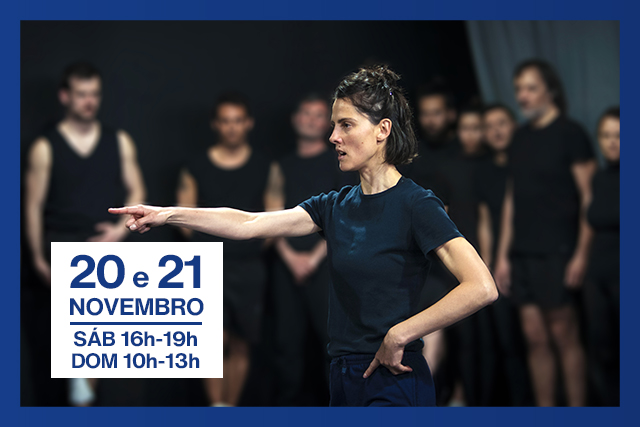 The Suzuki Method is a theatrical training, which brings together a strong philosophy and grammar for the performing artist. Developed by Tadashi Suzuki and his company Suzuki Company of Toga (SCOT) in Japan, it is inspired by Noh Theater, Kabuki, Kathakali, Greek tragedy, martial arts, ballet, sports, among others.
One of the most powerful contemporary theatrical methodologies, it develops the control of breathing, energy and the center of gravity, which are fundamental tools in the work of the actor and dancer, which enhance and multiply their expressive and emotional skills, as well as their internal sensitivity. It seeks a rigorous approach to the performance artist's work, to restore its magnitude on stage, awakening the animal energy that lies dormant in the contemporary body. A grammar to communicate through the body and voice, a channel to establish a deep dialogue with the viewer and the world around us.

Degree in Physical Theater from the Royal School of Dramatic Art (RESAD) in Madrid. She specializes in Japan in Suzuki Method, with Tadashi Suzuki, Kameron Steele, Mattia Sebastian Giorgetti and with SCOT Company; in the US, Wales and Spain she studies with SITI Company, Suzuki and Viewpoints; Study the Six Viewpoints with Mary Overlie; Mime and Pantomime in Spain and England; and Commedia dell'Arte in Italy, with Antonio Fava. Actress for directors such as Tadashi Suzuki, José Luis Gómez, Ernesto Caballero, Antonio Castro or Mattia Sebastian Giorgetti. She has worked in multiple productions at Teatro Real in Madrid, at SCOT company in Japan, where she is a member of ISCOT (International Suzuki Company of Toga). She stars in films such as 'A Pollock painting with blood', 'Hereje' and 'Al acecho del leopardo'.She develops her teaching activity since 2009, in schools and structures in Portugal, Spain, Italy and England.Coordinator and director of the 'Teatro de Vizinhes' in Faro and 'Community Theater Group - Quarteira Fora da Caixa'.Founder of Colectivo JAT, where she directs, together with Miguel Martins Pessoa, more than ten shows.Artistic director of MOMI – Festival Internacional de Teatro Físico – Algarve.